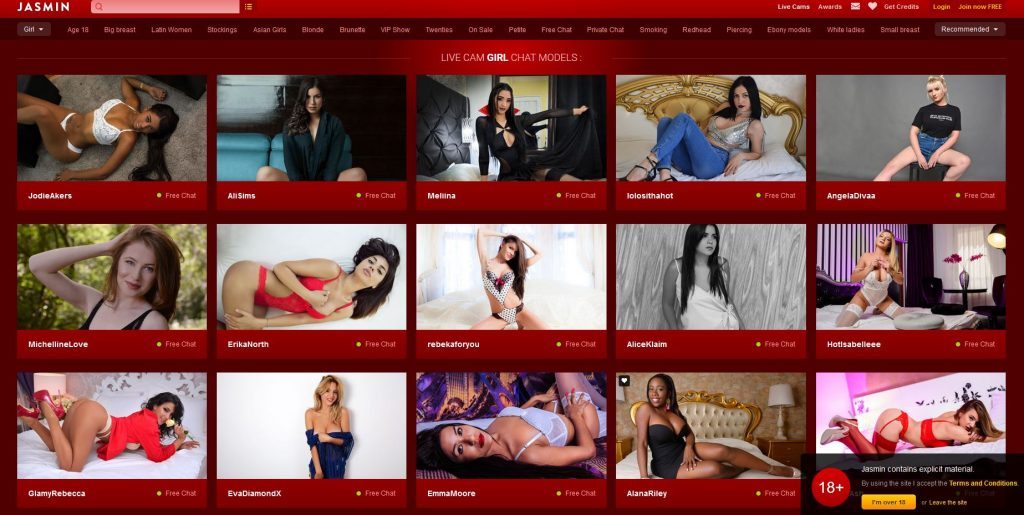 Jasmin is a live webcam website that has an accompanying app where visitors and members can partake in voyeurism and interactive adult connections with models.

There’s not many places these days where you can have a true connection on the internet that does not immediately die the second you power down your computer. But Jasmin does establish connections and does it so well that you’ll swear you’ve known some of these people all your life.

It is the sister site of Live Jasmin, and incorporates the same logo and a similar style. Jasmin requires that users are a minimum 18 years of age, and those new to signing up can either become a performer themselves or a standard member. If you become a member you have a multitude of ways where you can bring in customers that are dedicated to you. You can also choose a variety of niches that you can indulge in so you don’t have to be relegated to just one.

What Is The Difference Between A Free And Paid Member?

Like more and more cam websites are embracing, Jasmin gives both brand new and returning visitors that search for or stumble onto the site the ability to decide if they would like to become a premium member before spending a dime. Free shows and a peek at what each model has to offer are provided so that casual observers can make an informed decision if it is an activity they would like to contribute. By allowing you to view their performers for free for a small period of time, you can see exactly what is being offered from the performers at absolutely no cost to you.

Of course, browsing for free has its advantages in being able to ‘window shop,’ but areas of the site are restricted unless credits are bought. But this is a very normal way of  allowing lurkers and new users to view their performer’s content without anything being illegally downloaded or taken from the website or a performer’s profile page. This typically comes in the form of content that cannot be viewed unless they are ‘paid’ for with digital money.

In the simplest of terms, credits are the currency that Jasmin utilizes to reward and pay its performers. It is entirely dependent upon the generosity of members, as they are given full autonomy to delegate their credits as they please. Credits are bought on various places on the site or app with actual dollars that are merely converted to a digital form.

But credits can also be purchased on a need by need basis and there is no subscription or rule that requires users to purchase credits every month. So once a credit is in your account, it stays there until it is used.

Credits are of particular interest to performers, because the amount they take in is what generates their paychecks. There is no limit to the amount of credits a model can earn, which is why Jasmin is very popular for men and women who prefer to work from home and still make a solid living.

Profiles are the easiest way for visitors to not just find a particular model, but learn more about them. This information comes in the form of sex and age. They are very similar to a dating profile, in that users can scroll and access more content if they so choose. Some performers will have more of their profile filled out than others. But it just gives you a general brief overview of the performer and what they like to do. They can also feature what they like to be called. 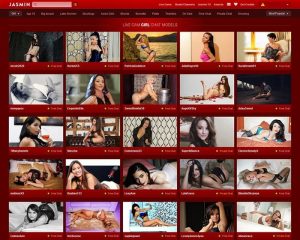 Models need their profiles to serve as their billboards when they are not performing live online. When they are logged in, the profiles serve as their personal chat rooms to anyone that stumbles across their page. The fact that profiles can be accessed even when they are offline is very valuable, as customers can still use credits to purchase still photo galleries, videos and other forms of content that can be unlocked. In this regard, it almost becomes a store front that promotes their services and is very efficient at instant transactions.

And also by doing this, anyone will be able to purchase a performer’s videos, pictures, and other content whenever they feel like it. They will not need to message the performer who is away.

It is advantageous to the talent, be it couples of single individuals, to make the most of the real estate provided in their profile. It has been proven time and time again through user feedback that most fans prefer an extensive array of material and listed interests. Models can write a thorough description showcasing not just who they are, but what their fetishes are and how they plan to entertain fans.

The most successful performers have set up numerous revenue streams, while at the same time providing free content to pull in new customers. On Jasmin this is setup under the tabs of Free and Premium to avoid confusion and bypass accidental purchases. By having a large amount of videos and photos on their profile pages, performers can also turn the content that they have created into passive income because they do not need to go back and redo their work. They are free to sell their performances and collect money from the purchases, no matter how old the videos or photos are.

Profiles are also a viable place for unpaid members to purchase credits if they are enjoying what they are seeing.

It makes the process user-friendly because you are guided directly to a checkout so you can get back to your model as soon as possible.

Having thousands of choices to sort through to watch and communicate with is most definitely a good problem to have, but it can still be overwhelming. Jasmin solves this potential pitfall by making select parameters that can have results filtered to your preferences in a matter of seconds. Age, Language, Appearance, Region, Build and Status offer a wealth of decisions to highlight what each visitor is seeking specifically.

These are all great search functions to use. It is not surprising that a website that is this popular has so many special and unique features. It is most likely that they developed these extra features while maintaining the other site, LiveJasmine.

One would be remiss not to mention that the layout of categories on Jasmin and Live Jasmin are slightly different, but all the same sections can be accessed. You’re also able to use the search bar and index search features to find the perfect performer for you. You don’t have to wander around the site aimlessly and hope that something just pops up.

Most who visit an adult video chat community already know what they want to engage in or witness, and this typically comes in the form of fetishes. To find out what models perform which, as well as what else they are open to, both free and paid members have the capability to search through the Willingness tab. This directly pinpoints what you desire, and who has agreed to engage in whichever fetish.

What Is The Difference Between Jasmin And Live Jasmin?

Even though they are owned by the same company, the sites Jasmin and LiveJasmin have a few subtle differences that are noticeable to visitors.

The latter is the original iteration of the platform, and has an older style and aesthetic than the former Jasmin is a more watered down version, however this does not mean that it incorporates fewer features and options. Instead, Jasmin’s site design is more mobile friendly, and much more compatible on tablets and additional mediums. Its initial layout provides fewer options, but they can be reached after going through a series of menus. At the end of the day, both provide the same thing: a way for performers and fans to interact.

After navigating through Jasmin it is a foregone conclusion that it is near the front of the pack as far as experiences due to how well it provides support and actively listens to the needs of the models and fans. Its remarkably uncomplicated front makes it a painless exercise to search and land exactly where you want to be to enjoy the model or models.

Additionally, special attention is paid by Jasmin to make sure that the exchanging of funds to convert them to credits is done securely, with scammers not having the opportunity to acquire the sensitive information of customers.

I don’t know who Jasmin is but I do know that Jasmin.com is one of the best live sex cams out there. A modern and attractive site design, couples with simple navigation, beautiful models and HD cams make for an overall very pleasant experience.